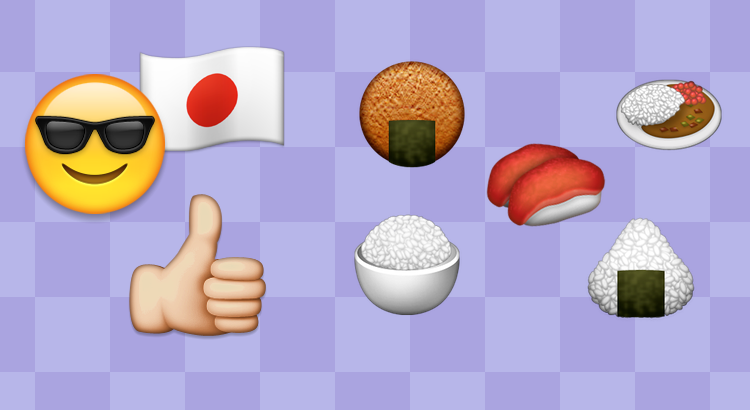 The Japanese cuisine offers a great variety of dishes and it’s one of the most healthy and rich. In this second post in this series, we will review some of the icons representing Japanese food in emoji.

Senbei 煎餅 is a Japanese traditional cracker.  Usually served as a casual snack or with tea, this rice cookie can have very different flavours and sizes. It usually comes with nori seaweed.

White plain cooked rice, known as gohan 御飯, is served with most of the Japanese meals. It’s probably the most important food in the Japanese cuisine.

Originally from India and brought to Japan by the British, this popular Japanese dish has has been adapted over time to the tastes of the Japanese people. Not as spicy as the original one and always served with rice, it might come with more or less ingredients.

Sushi 寿司 is probably the most famous dish in the Japanese cuisine. Made with rice mixed with vinegar, salt and sugar and also raw or cooked seafood or vegetables. There are many different kinds of sushi depending on how the ingredients are presented. The most popular one in Japan is nigirizushi 握りずし: a small portion of cooked rice where the fish is placed on top of it.